Discovery of a new low energy neutron resonance of Y-89

A new neutron resonance in Y-89 was discovered by a neutron capture reaction [term 2] experiment using the time-of-flight method [term 3] with pulsed neutrons from the spallation neutron source [term 4] at the Japan Proton Accelerator Research Complex (J-PARC). The observed resonance energy is 19.7 eV, which is much lower than the lowest energy of the resonance reported before (2.60 keV). In addition to the time-of-flight measurement, the nuclide of the resonance was identified by prompt gamma-ray analysis.

The measurements were carried out at J-PARC in Tokai-mura, Ibaraki Prefecture, using a pulsed neutron beam from the spallation neutron source at the Materials and Life Science Experimental Facility (MLF) of J-PARC. The spallation neutron source at J-PARC MLF provides users with the world's highest-class intense pulsed neutron beams. A sample of yttrium was placed at a flight distance of 27.9 m in ANNRI, a neutron beam line in J-PARC MLF, and the prompt gamma rays emitted from the neutron capture reaction were detected using a NaI(Tl) detector. The neutron energy was determined by the time-of-flight method. In addition, prompt gamma-ray spectra were measured with a Ge detector.

A time-of-flight spectrum of the Y-89 measurement is shown in Fig. 1. The lowest energy of the previously known resonance of Y-89 was 2600 eV. In the present measurement, a new resonance was observed at 19.7 eV, much lower than the previously reported resonance. Yttrium has only one stable isotope, Y-89 (100% natural abundance). Measurement does not require an expensive isotope-enriched sample and thus the neutron capture cross section of Y-89 is easy to measure. Nevertheless, it was surprising to discover a new resonance at such a low energy. 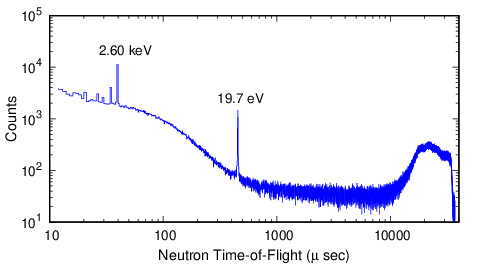 It is not possible at present for nuclear reaction theory to predict the energies of individual resonances, and thus measurement is the only way to find out. For yttrium, there has been only one measurement in the energy range below keV, which was made in the 1950s in a research reactor at the Brookhaven National Laboratory. After that, there were no measurements for more than half a century. Since no resonances were observed in the single measurement, no resonances were believed to exist in the low energy region.

A database of neutron resonances has been built based on a huge amount of past measurement data. Therefore, we have a bias that we know well about resonances of common stable isotopes. In this measurement, we were initially interested in the keV region, but we found it unexpectedly because J-PARC allows us to measure in a wide energy range from meV to keV. Initially, we thought that the resonance was caused by impurities in the sample because it did not correspond to the reported resonance of Y-89, but since there was no corresponding nuclide in the database searched by resonance energy, we concluded that it was the resonance of Y-89 itself. Additional measurements using a germanium detector were carried out, and it was concluded that the resonance was definitely Y-89, not only from the time-of-flight spectrum but also from the prompt gamma-ray spectrum.

[Term 1] Neutron Resonance：
In neutron-induced nuclear reactions, there is a phenomenon in which a reaction cross section at certain energies increases by many orders of magnitude, and this phenomenon is called resonance.

[Term 3]  Time-of-flight method：
A method to measure the energy of neutrons. The neutron energy is determined by measuring the time of flight of a neutron over a certain distance.

[Term 4]  allation neutron source：
When a particle of high energy in the order of GeV collides with an atomic nucleus, a spallation reaction occurs that breaks the nucleus into pieces. The spallation reaction produces a large number of neutrons, and is used as an efficient way to generate neutrons. Spallation neutron sources are being operated and constructed in many countries around the world to produce high-intensity neutron beams.